The Best Fuel Efficient Cars In The Market 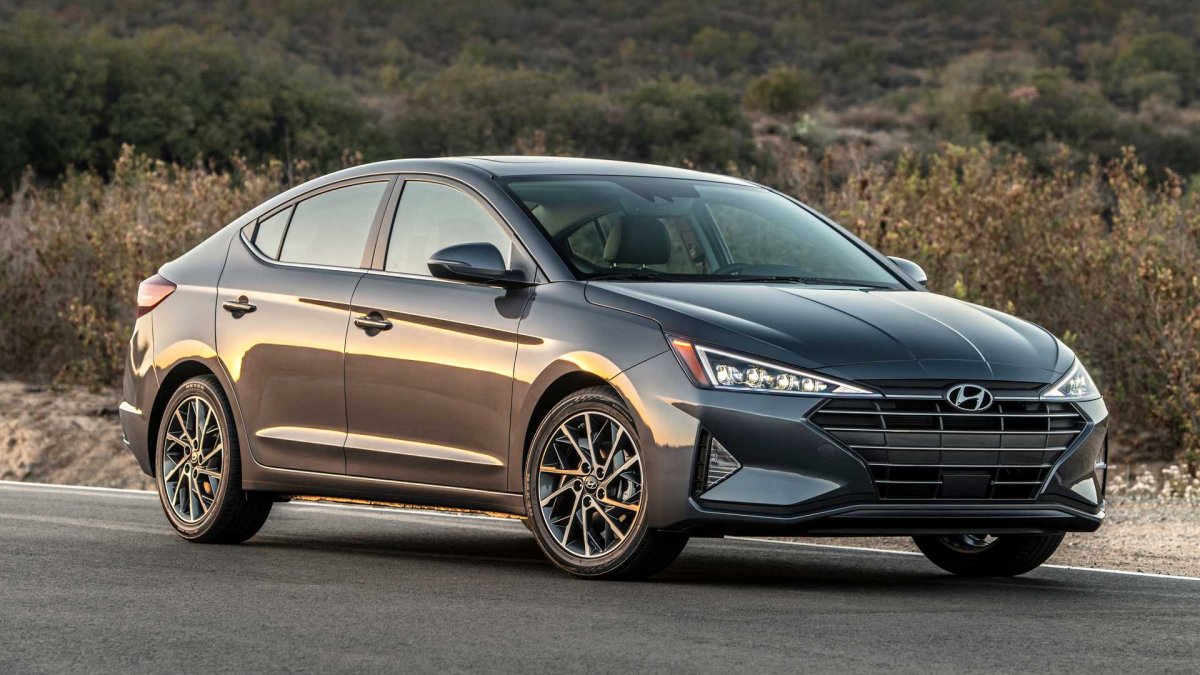 One of the most significant factors to remember when purchasing a new vehicle is the fuel economy. They won't remain that way indefinitely, even if gas rates are down.Many vehicles marketed today deliver amazing fuel economy, particularly as opposed to what you might be trading in. Below are the most fuel-efficient vehicles depending on the general fuel-economy test outcomes of Consumer Reports.

The quest for an excellent fuel economy has gone beyond ultra-light models with small engine sizes and low-power ratings. Advanced turbocharged powertrains and sophisticated engine management systems offer an attractive fuel economy without performance or features being given up.

The list is based on estimates of the total economy of city/highway gas from the EPA in 2019. It includes no pure electric models but includes diesel cars, gasoline / electric hybrids, and hybrid electric vehicles (PHEVs) plug-in. We used the projections of PHEVs ' combined fuel economy as if they were operated as traditional hybrid vehicles and not recharged from outside sources. If there is a specific vehicle with different efficiency levels available, we have listed the model with the highest gas mileage. Although some of these cars are diesel-powered, to define their effectiveness, we still use the generic word gas mileage. 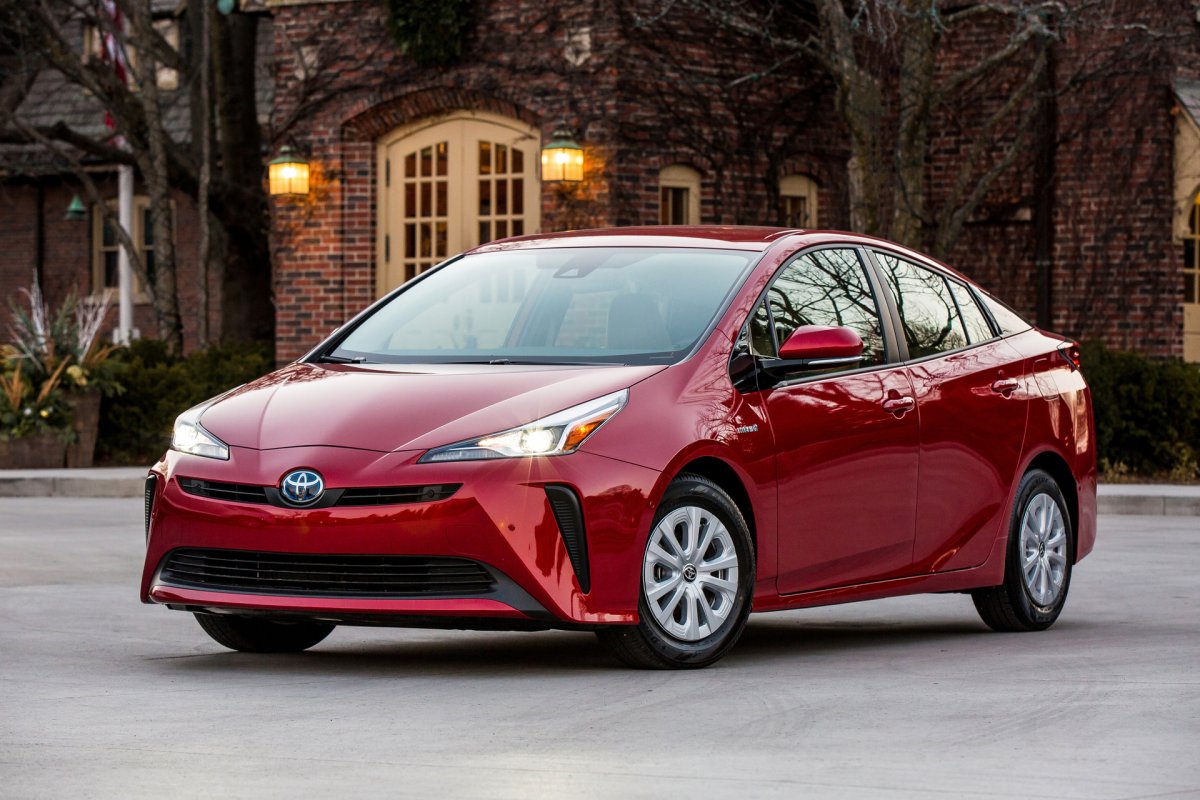 The Toyota Prius at this stage is something of a known amount. The best-selling hybrid nameplate in the world, it's probably hard to find someone who hasn't heard of the fuel-saving vehicle. This year, Toyota has a new way of attracting even more customers to the Prius ' lifestyle thanks to the addition of all-wheel drive as an alternative.

In most cases, the 2019 Toyota Prius AWD-e has the same powertrain as any other model. Up front is a 1.8-liter gasoline four-cylinder and an electric motor-generator that delivers a combined 121 horsepower. However, where the Prius front-wheel drive has a 3.6-hour lithium-ion battery pack, the AWD-e utilizes a 6.5-hour nickel-metal hydride pack. Toyota argues that the main consideration when using the NiMH pack is its decreased susceptibility to cold weather — i.e. the kinds of snowy weather in which a Prius all-wheel drive could be driven. The final shift is at the rear axle, where the Prius has an electric motor rated 7 horsepower and 40 pound-feet.

However, the most significant issue about this vehicle is how fuel economy is affected by adding all-wheel drive. In fact, the distinction is tiny; the AWD-e LE and XLE are combined with an EPA rating of 52 miles per gallon town, 48 mpg highway and 50 mpg. That's just 2 mpg less than the equivalent front-wheel-drive Prius in each category. And this is the most fuel-efficient, non-plug-in, all-wheel-drive vehicle that you can purchase today. 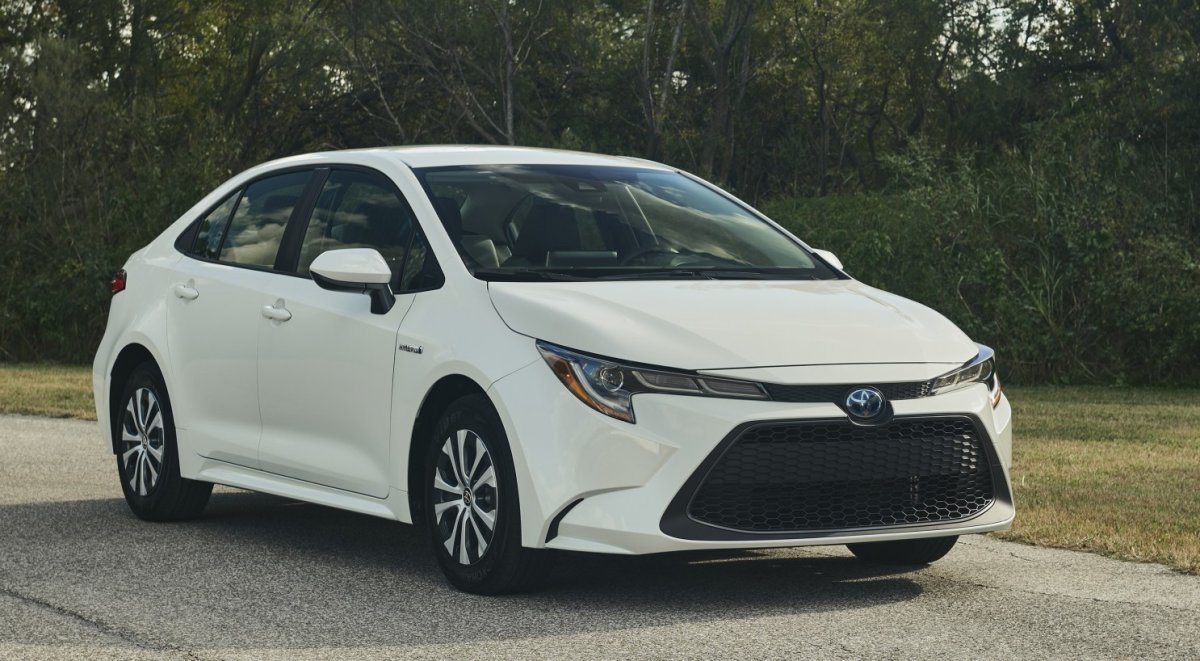 Without too much effort, the standard Corolla can pass 40 miles per gallon on the highway. While it doesn't top the combined Toyota Prius Eco's EPA-estimated 56 mpg, we are confident those considering a Corolla Hybrid over the home hatchback won't feel like they're missing too much thrift.

While the vehicle almost always begins from a stop under the force of its electric engine on its own, it's difficult to maintain it running on electric without accelerating so slowly that the traffic might begin to get impatient. Find the best way to lean a little harder on the accelerator when you get up to speed, using just a little more of the 121 net horsepower from the 1.8-liter I4 and electric motor. The continuously variable transmission emits some drone, of course, but it's programmed for effectiveness, and things like modifications in simulated equipment only decrease its effectiveness.

The Corolla Hybrid is only available in one trim, LE, and it doesn't offer any alternatives, so what you see is what you get. It's both nice and bad from a tech view. The de facto infotainment scheme packs an8-inch touchscreen, and while the resolution is small, the boot-up time is adequate, and the average response is great. Apple CarPlay is included, but Android Auto is not, despite the fact that Toyotas are picking it up for another 2020 model year. 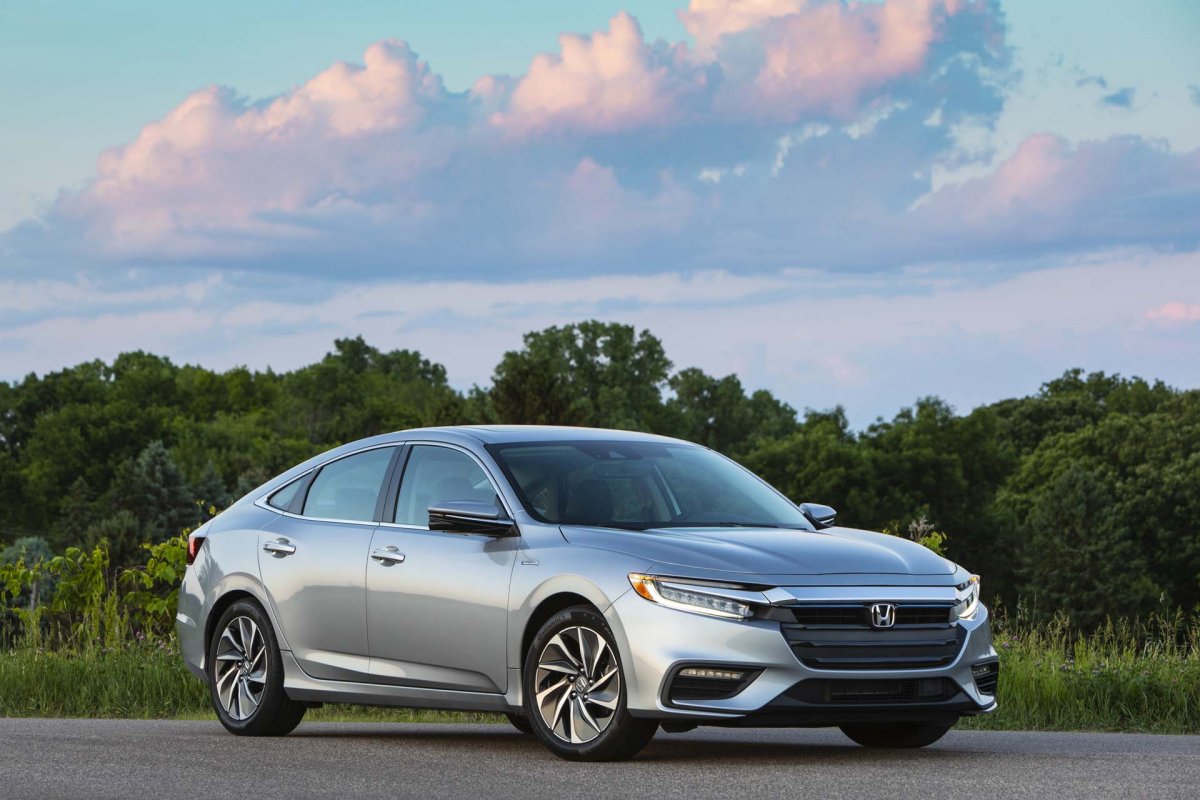 A 1.5-liter Atkinson-cycle petrol engine putting out 107 horsepower and 99 pound-feet torque under the Insight's sheet metal. Toss in two electric motors, and you have a hybrid stew that puts out 151 horsepower net and 197 pound-feet. It may take some fiddling through methods and ignore the ideas of your brain on motor noise to make sense of it all, but it's pretty rewarding once you do that.

Four drive modes are available: Normal, Sport, Eco, and EV. In Eco mode there is significant acceleration penalty, which maximizes electricity-only operation but gets the best fuel efficiency. Normal mode sacrifices economy to accelerate more Civic-like. Sport, on the other hand, makes the engine rev longer without any significant performance gains, and it actually uses the speakers to make the engine louder, so it's best to be ignored.

A tiny battery implies you will watch the charging gage fall amazingly quickly, but it's still great to have a few miles of EV-only operation without paying for a hybrid plug-in configuration. The EV button allows you to choose when to let the battery do its thing on its own, but there is no "hold" mode to guarantee charging when you want it. The motor will kick in with scarcely any sensation translating into the car, but as it is not attached to the wheels, the revs will increase and fall independently of the motion of the car, which requires some getting used to. The motor is amazingly loud at greater revs in any mode— but this is our only true complaint as to how the Insight works. 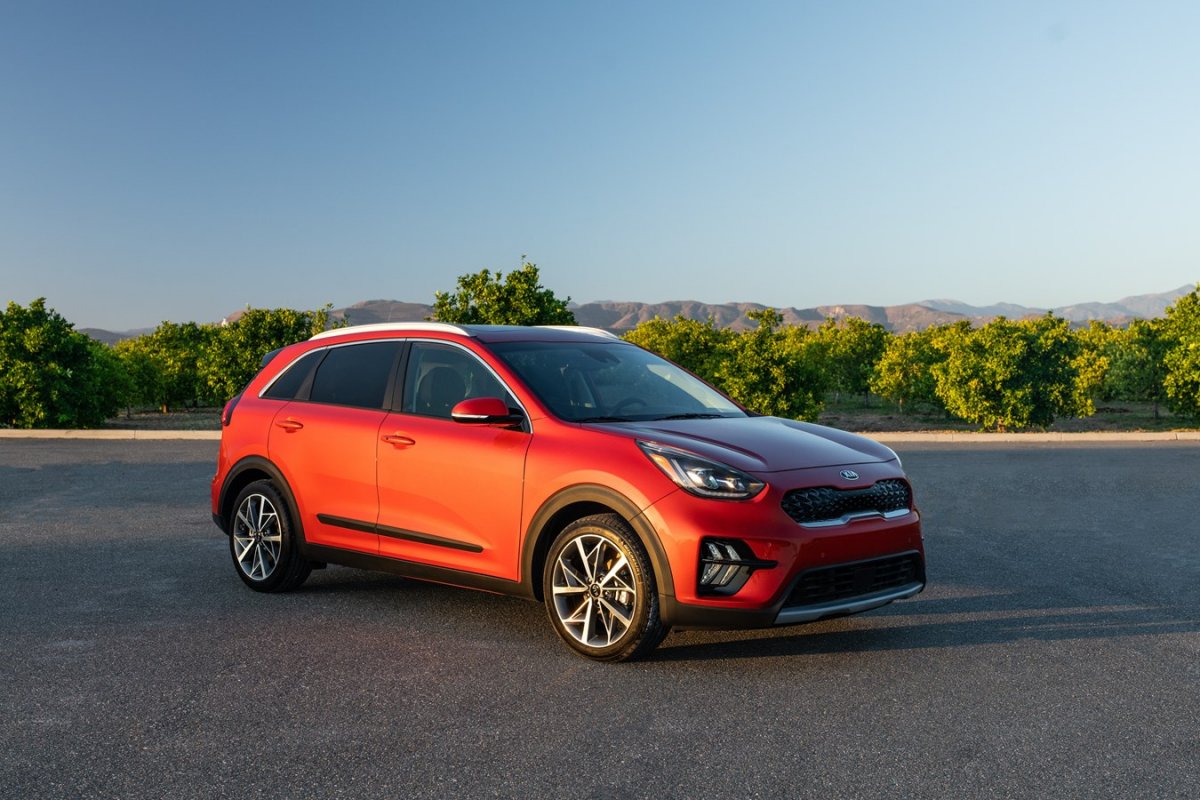 The Niro is powered by a four-cylinder 1.6-liter engine that operates in conjunction with a 1.56-kilowatt-hour lithium-ion battery to generate 139 horsepower and 195 pound-feet torque. This is merely not enough in a subcompact crossover weighing about 3,300 pounds.

However, the silver lining to this sluggishness is the economy of fuel. The most effective Niro FE is EPA-rated in the town and 49 mpg highway for 52 miles per gallon. The 2-inch-larger wheels and approximately 200-pound heavier curb weight of my top-of-the-range Niro Touring tester, however, decrease fuel efficiency quite a bit to 46/40 city/highway mpg. We averaged 41 mpg after 12 days and 1,209 miles, most of which was spent on the road.

Not as visible off the highway is the absence of energy, the electrical support providing brief torque bursts for off-the-line acceleration. The six-speed, dual-clutch automatic transmission is great for fading into the background, but sometimes takeoffs can be jerky, and the changes lack the distinctive speed that other car manufacturers will find in dual-clutch systems.

The Kia Niro is still offering a convincing package after a few years on the market. But with all-wheel-drive competitors like the Subaru Crosstrek Hybrid and the Toyota Prius AWD-e entering the market, the Niro might just need to step up their game a bit to maintain customers interested.

If you are in the market for a new or used car, we can help make your next car purchase a dream. Keller Used Car has a huge inventory with fuel-efficient cars and great cars. Browse our inventory and come see us today!